The Arizona CPS Scandal That Rocked the Nation 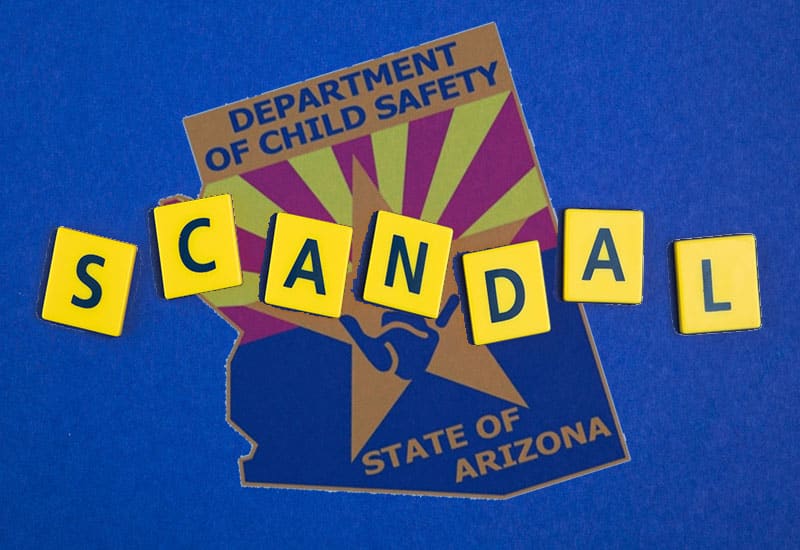 The Arizona Child Protective Services (CPS) department, and now the new and “improved” Arizona Department of Child Safety (DCS) have left a slew of horror stories regarding the Arizona CPS scandal in their wake. Stories regarding removing children from their homes and placing them in a broken, unvetted foster care system. A home where these children are being horribly physically and sexually abused.

Here at Saving Grace Advocates, we have blogged about a lot of these stories so that the public can know about how truly the Arizona government has failed our children. It’s no secret that when a state government cuts funding to welfare services for families living in poverty, the cases of child abuse and neglect will rise. It’s pretty simple really. Less money equals fewer resources. And fewer resources means less staff. It’s a devastating snowball effect in action.

When government services that assist families in need with things like childcare and mental health, suddenly remove those services for families, it puts a strain on the system. Additionally, this system is only set up to handle a certain amount of abuse and neglect cases. When services are cut and strain is put on an already flawed child protective agency, the children themselves suffer. They’re the ones who pay the ultimate price.

The latest Arizona CPS scandal involves a lawsuit filed against the agency. Also, this suit was filed against a foster parent as well. One that was “vetted” by the agency. One that slipped through the cracks time and again. And one that is currently sitting in prison for unspeakable acts that he inflicted on multiple foster children.

The Case of David Frodsham

In late 2018 a $15,000,000 lawsuit was filed against the Arizona DCS department and former foster parent David Frodsham. In December of 2016 Frodsham was sent to prison for multiple charges of child sexual abuse and child pornography. The lawsuit alleges that DCS ignored multiple reports of abuse regarding the Frodsham household.

Frodsham was eventually ordered home by his commanding officer after multiple, verified allegations of harassment made by female military personnel. One commanding officer wrote in his file, “I would not recommend placing him back into a position of authority but rather pursuing disciplinary actions at his home station.” However, upon returning home, somehow Frodsham was hired by the Network Enterprise Technology Command, the Army’s IT service provider. Despite his reputation, they placed him in global command of 15,000 soldiers and civilians.

Just a few short months later, police arrested Frodsham in Arizona for leading a child sex abuse ring. It included an Army sergeant who was caught posting child pornography to the internet. There were several victims of this abuse which included some of Frodsham’s own foster and adopted children.

What brought about the Arizona CPS scandal was that after Frodsham pleaded guilty to the sex abuse charges in 2016, records uncovered by the news media clearly showed that both The US Army, as well as the Arizona CPS department ignored a tremendous number of red flags over the course of an entire decade.

Not only did this negligence allow Frodsham the freedom to abuse multiple children, including his own adopted sons, but also opened up Frodsham to being vulnerable to blackmail if his practices ever came to light, which due to his security clearances was a risk to national security.

How Arizona CPS and the U.S. Army Failed in the Frodsham Case

Nearly 20 complaints of abuse, neglect, and maltreatment were made against Frodsham and his wife, Barbara. However, the Arizona CPS still allowed the Frodshams to foster and adopt their many children. The Arizona CPS division seemingly ignored these red flags. However, that’s not all. The US Army also gave Frodsham sensitive jobs and security clearances. This could have made him an obvious target for foreign intelligence had they learned of his illicit sexual practices.

The public relations officer at Fort Huachuca confirmed that Frodsham was a program manager there when he was arrested. However, they declined to provide any information on if Frodsham was disciplined after returning from Afghanistan. Furthermore, they refused to confirm if any of the reports of abuse were investigated by the Army.

To date, there are a total of three adopted sons who have filed suit against Arizona CPS. Their claim against the organization? Allowing David Frodsham and his Wife to be licensed as foster and adoptive parents where they were physically and sexually abused. The civil complaints allege that caseworkers overlooked numerous signs that the Frodshams were unfit to foster and adopt.

These signs include a police report of a sexual assault submitted by one of the Frodsham’s biological daughters, against one of their biological sons. This coupled with the fact that both the Frodshams were also victims of child sex abuse should have been enough to disqualify them from fostering and adopting.

In the lawsuits, the boys explain how terrible the physical and sexual abuse was in the Frodsham household. The boys would be slapped and punched and would have hot sauce put into their mouths. They would be hit with wooden spoons and would have their fingers bent back to inflict pain. Apparently, Frodsham’s wife never sexually abuse the boys. However, it was clear that she knew of the abuse. Additionally, she had even walked into the room twice while the abuse was taking place.

Arizona Continues to Fail in the Frodsham Case

Over 10 years, Arizona CPS failed to conduct perfunctory investigations into the 19 reports of abuse against the Frodshams. All of the adopted and foster children made multiple reports to Arizona CPS, all of which fell on deaf ears.

There were two documented phone calls to Arizona CPS case workers from the boys at their school reporting that David Frodsham was abusing them. After the first call, the case worker reported to Frodsham’s wife that they had called them. Soon after this report, the Frodshams began to interrogate and punish the boys for reporting them. Finally, after the second call, the case manager refused to investigate the allegation of abuse. Why? Apparently, the drive was too long to get from his office to the Frodsham’s house. Shameful!

One of the boys at one point ran away from the Frodsham’s house and was picked up by the police. The boy reported to the police that Barbara Frodsham had been physically abusing him. The police then photographed multiple injuries and bruises on the boy’s body and reported the allegation to Arizona CPS. Five weeks later a case worker came to the Frodsham house, armed with the police report and photographs, yet still found the report of abuse “unsubstantiated.”

When asked by the press about the Frodsham case, Arizona Department of Child Safety spokesman Darren DaRonco declined to make a comment. The only statement made by the department was an email sent outlining the States procedures for screening prospective foster parents which stated: “Despite all of these safeguards, people are sometimes able to avoid detection,” DaRonco said, “especially if a person has no prior criminal or child abuse history.”

The Arizona government is so determined to fight the lawsuit filed against them by the victims of the Frodsham’s, that they have already paid over 1.6 million dollars to a private law firm to defend Arizona CPS. Normally it’s the Arizona Attorney General’s Office tasked with the defense of a civil suit filed against the state. However, the law allows legal services to be provided through contracts if the matter calls for it.

A massive amount of money has already been paid to Rusing, Lopez & Lizardi for legal services provided. However, the case has yet to even go to trial. According to public records obtained by the press, another $150,000 in invoices is currently awaiting payment.

The jury trial, in this case, was slated for February but was vacated due to COVID concerns. There’s no new trial date yet. Meanwhile, the boys’ attorneys filed a notice of claim on behalf of the youngest of them.

The boy, now 18 but still referred to as “John Doe” in the legal documents, now deals with mental issues. As a result, he was recently committed to an institution for treatment.

The claim states “John Doe’s childhood was destroyed. He suffered years of torture, and his future life will be forever marred by the abuse,” the lawyers wrote. “John will likely never be able to hold stable employment, maintain stable relationships, or be able to operate in society within the rules of law and authority due to the years of abuse and neglect he endured at the hands of the responsible parties.”

Is This Latest Arizona CPS Scandal the End of it?

After the DCS department took the reigns of the Arizona child welfare, at first it looked like everything was on the up and up. The number of backlogged cases decreased. They revamped the hotline for reporting abuse and neglect allegations. It seemed like the new and improved department was up to the task of doing what the old CPS department could not.

That only lasted for a while as the backlogged cases began to pile back up. The Arizona press again reported cases where DCS workers sent perfectly safe children into a once again, broken foster system. One where they were regularly abused. The Frodsham case is unfortunately one of many in recent years.

Our children really are our future, and it is the job of state and federal governments to protect them. We hope that one day we will see the last Arizona CPS scandal reported by the media, but it appears that day is long in the future.

Costs to document this historical government tragedy have been excessive. However, they are far from over. Any contribution you can make to aid our cause is most appreciated.

You can donate to Saving Grace Advocates using the link provided. Please help us fight Arizona CPS corruption. We must bring justice to the families and children who have suffered at their hands. Thank you for your continued support and contributions.