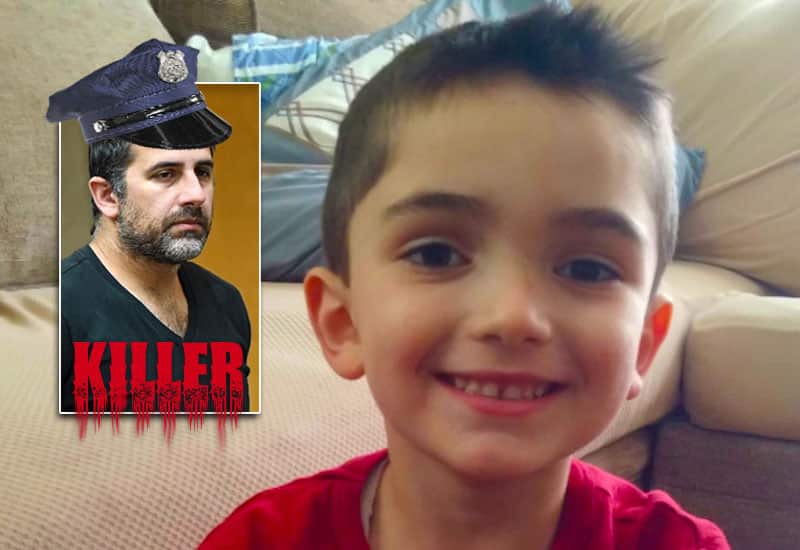 According to the Facebook Group Justice for Thomas Valva, “Thomas Valva was horrifically abused and ultimately murdered by his father, Michael Valva, an NYPD police officer, and his fiancé Angela.” Thomas and his two brothers suffered for years. Frequently, Thomas Valva and his brothers were punished via starvation and were placed out in the cold. Subjected to frigid New England temperatures. Left in a freezing cold garage with no pillow, blankets, mattress, and made to sleep on hard cold concrete. As a result, Thomas Valva died of hypothermia on January 22, 2020.

In the final days of his young life, 8-year-old Thomas Valva was dragged down a staircase by his father’s fiancée and thrown into an unfinished garage. The autistic boy had soiled his pants while his father, Michael Valvain was at work. Later, his fiancee sent videos and texts to Michael about Thomas, his punishment, and later, the fact that he wasn’t looking good after spending time in the freezing cold. Michael’s response was “Fuck the piece of shit. He’s not going anywhere.”

Thomas Valva would later collapse with an internal temperature in the mid-70s and would soon die as a direct result of the abuse he suffered from his father and stepmother. His father and stepmother did their best to lie about what had happened. However, video evidence from their security system and the communications they engaged in proved to be damning. Police arrested the couple and booked them on murder charges.

“Now everybody is trying to do the right thing. But where were you when I begged you for help? When I could have saved my son’s life?”

Finally, grieving mother Justyna’s sons were returned to her loving arms. However, the damage was already done, as her children had been tortured and abused. Physically, mentally, and sexually. One of her beloved children was dead. The other two were exhausted, distraught, starving, and had severe psychological issues. Justyna acknowledged that her sons would surely need years of counseling to overcome what they had experienced under the hands of their abusive caregivers.

In June, Justyna filed a $200 million dollar lawsuit against her son’s murderer and the county officials who allowed it to happen. The suit claimed that as far back as 2017, she had shown the court and multiple agencies evidence of physical, mental, and sexual abuse of her children. Several Suffolk County Child Protective Services caseworkers, investigators, Tommy’s school district, the judge, his father Michael Valva, and Angela Pollina were all named in the suit.

Now, over one year later, Michael Valva and Angela Pollina have yet to be convicted. As of writing this, the two remain incarcerated without bail. They’ve been charged with second-degree murder and four counts of endangering the welfare of a child. If convicted, they’ll face 25 years to life. Meanwhile, Thomas’s mother has been documenting her struggles and heartaches on her StandAgainstChildAbuse Twitter account.

How Could This Happen?

The boy’s biological mother raised numerous concerns to the court. Neighbors noticed oddities in the family dynamic. The child’s school had made notes of bruising, hair pulled out by the root, and forced diaper wearing. In fact, teachers in the East Moriches School District made at least 20 calls to the New York State Child Abuse Hotline. Furthermore, the Department of Social Services had actually mandated that Michael and Angela attend parenting classes for a year. However, they retained custody of their children, even as abuse allegations persisted.

Additionally, Justyna had warned a judge nearly three years before that her boys would die if they were left in their father’s care. However, all those concerns fell on deaf ears. They went ignored by the very people who were there to “protect” him. As a result, a little boy was slowly murdered, and that murder was allowed to go on by the state.

As you can guess, there’s one person who deserves some severe punishment as well. She too is a criminal. And like Michael Valva, she too is protected by the law. In fact, she’s the one who oversaw that protection, ignored the warning signs, and allowed a vulnerable young child to be tortured, abused, and murdered. Her name is Hope Schwartz Zimmerman. The “honorable” judge decided to take the boys away from their mother. And to sentence that boy to death.

There was even a petition set up requesting the resignation and disbarment of Judge Zimmerman for her involvement in Thomas Valva’s death. The petition states that the community holds Judge Hope Schwartz Zimmerman “fully responsible for the death of little Thomas Valva,” and continues saying that they “don’t want to see her rule another child to an abusive parent,” or “fail another innocent child.” She must not be allowed to go on living her life and destroying others without consequences.

“Judge Zimmerman signed a direct death sentence for Thomas Valva and the rest of the children, being aware that these kids were starved and continuously abused by their father.”

Where Do We Go From Here?

Judge Zimmerman and so many other family court judges like her must see their day in court. They must face the music. If they don’t, then there’s no reason for anything in the system to change.

We know there are terrible parents out there. We need people to help out in situations like this. As such, we rely heavily on the ethics and good judgment of the people we place in these important positions. Police, judges, attornies, lawmakers… we have to hold them to high standards. Additionally, they have to hold themselves to high standards as well. If we continue to be lax and allow the courts to destroy families and the lives of our children, then we’re just as at fault as the criminals themselves.

We all have to take a stand. Report abuses of children and report abuses of power. Keep doing it until someone pays attention. Keep yourself educated about elected officials and keep an eye on those in power. Report suspicious behavior and don’t let others convince you that something you saw was “no big deal.” We can’t keep doing the same old thing and expecting this rotten system to just fix itself. It takes all of us. Now let’s make it happen!