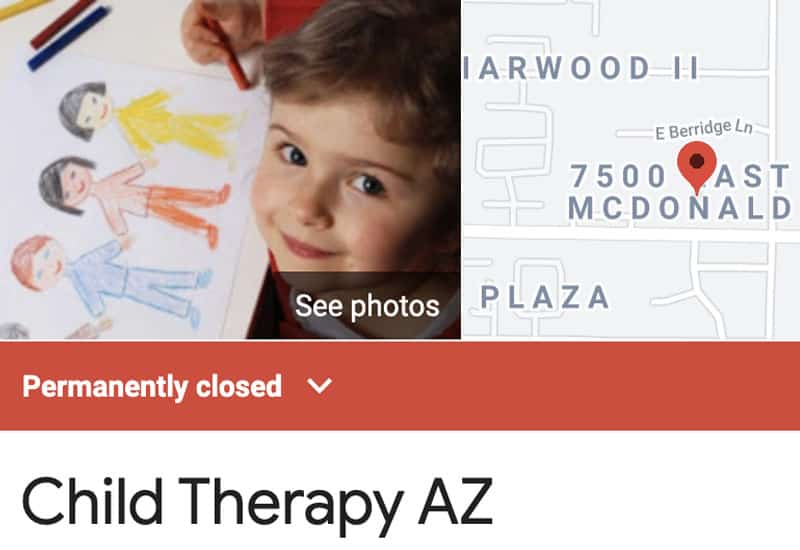 Talk about pleasant surprises. Since writing our article about the incompetently corrupt child therapist Diana Vigil, her business, Child Therapy AZ, appeared to have been shut down. Permanently!

While researching, compiling info, and writing the article only 5 weeks ago, Child Therapy AZ was still up and running. However, since the release of our article, the business is marked “Permanently Closed” on Google. Additionally, Diana Vigil’s website still claims it is “under construction.”

Sometimes though, this isn’t enough to ensure accuracy. After all, anyone can mark a business as closed on Google. And if the business owner isn’t vigilant, well they may never know things have changed. So to ensure Child Therapy AZ had, in fact, closed down, we decided to place a test call to the company. Just in case. To our surprise, their messaging system was still up and running. While there was no answer on the first attempt, a second attempt yielded a response from someone on the other line.

Apparent, Child Therapy AZ is still up and running. In fact, they were completely unaware that their business had been marked as permanently closed on Google. On the other hand, Diana Vigil’s secretary was aware that the website was down. However, she claimed that it was in the process of being worked on.

In summation, it appears that Child Therapy AZ is, unfortunately, still operating at this point in time. However, they seem to be handling their business poorly. Shocking, we know. It should be no surprise that they manage their online business the same way they manage their physical one – without care, attentiveness, or dedication. For now, we can only hope that Diana Vigil is brought to justice and that her company Child Therapy AZ is shut down once and for all.